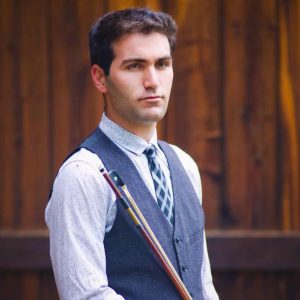 Native to Los Angeles, cellist Evan Kahn has been praised as “a cellist deserved of serious listening” for bringing his “electrifying … nuanced and colorful” style to all of his collaborations, from concerti to chamber music to contemporary performances.  Intensely passionate about new music and music of non-Western cultures, he has commissioned and premiered over 60 works by composers from around the world, including his father’s Cello Concerto.

As a soloist, he has performed with North State Symphony, Symphony Silicon Valley, the Veridian Symphony Orchestra, Segah Festival Orchestra, Diablo Symphony Orchestra, Bay Area Rainbow Symphony, Palo Alto Philharmonic, and Livermore-Amador Symphony, as well as the Carnegie Mellon Philharmonic and San Francisco Conservatory Orchestra, after winning both institutions’ concerto competitions.  In April/May 2018, he served as Artist-in-Residence with Performance Today at NPR, sharing some of his favorite works for cello and his philosophies on music and life.  In February 2019, he was named Musical America’s New Artist of the Month.

Evan attended Aspen Music Festival on a fellowship, where he studied with Juilliard professor Darrett Adkins and played co-principal in the Aspen Academy of Conducting Orchestra, the Aspen Sinfonia Concertante, and the Aspen Philharmonic as an Orchestral Leadership Fellow.  In summer 2016, he served as one of 40 student fellows in the Piatigorsky Cello Festival — fellows hand-picked from conservatories around the world — and in summer 2017, Evan attended the Taos School of Music to work with the Brentano, Borromeo, and Shanghai Quartets.

In addition to performing and teaching, Evan enjoys playing board games and watching British television.  He plays on a cello by Italian luthier Carlo Carletti, c. 1900, and a bow made for cellist Lynn Harrell by archetier Paul Martin Siefried.