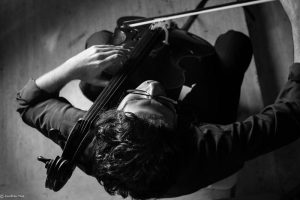 From the United States to Europe to the Middle East and Asia, Israeli cellist Amit Peled, a musician of profound artistry and charismatic stage presence, is acclaimed as one of the most exciting instrumentalists on the concert stage today.  At 6’5″ tall, Peled started life as a basketball player and was called “larger than life” when he enveloped his cello and “Jacqueline du Pré in a farmer’s body.”  Peled often surprises audiences with the ways he breaks down barriers between performers and the public, making classical music more accessible to wider audiences.  Tim Smith of the Baltimore Sun reflected on a recent performance: “Peled did a lot of joking in remarks to the audience.  His amiable and inviting personality is exactly the type everyone says we’ll need more of if classical music is to survive.”

During the 2016/17 season, Mr. Peled will continue sharing with audiences around the world the sound of the historic cello of Pablo Casals.  Mrs. Marta Casals Istomin, the widow of Maestro Casals, personally handed him the instrument, a Goffriler ca. 1733.  Some of the upcoming highlights with this historic cello include a Bach Suite program at the Ravinia Festival, a new Naxos installment with the Tempest Trio, performances with the Jerusalem Symphony Orchestra, Louisville Orchestra, Das Junge Orchester, Fairfax Symphony, Xalapa Symphony Orchestra, and the Palm Beach Symphony.  In addition to the previous engagements, Amit will make his debut with both the Warsaw Philharmonic and the Orquesta Filarmonica de Gran Canaria.  He will also be recording Nadia Boulanger’s “Three Pieces for Cello and Piano” and make a return trip to Russia to perform and teach at the St. Petersburg Conservatory.

Mr. Peled has performed as a soloist with many orchestras and in the world’s major concert halls such as: Carnegie Hall and Alice Tully Hall, New York; Salle Gaveau, Paris; Wigmore Hall, London; Konzerthaus, Berlin; and Tel Aviv’s Mann Auditorium.  Following his enthusiastically received Alice Tully Hall concerto debut playing the Hindemith cello concerto, the New York Times stated: “Glowing tone, a seductive timbre and an emotionally pointed approach to phrasing that made you want to hear him again.”

In the fall of 2016, Amit will release his fifth Centaur Records CD, “Casals Homage” which features the legendary 1915 Pablo Casals program that Amit has been performing around the world since 2014.  Amit also released a recording of the Schumann Cello Concerto with the Washington Chamber Orchestra earlier in 2016.  These records follow four immensely successful installments, “Collage”, “The Jewish Soul,” “Cellobration,” and “Reflections.”  As an active chamber musician, Peled is a founding member of the famed Tempest Trio with pianist, Alon Goldstein and violinist, Ilya Kaler.  Their Dvorak CD on Naxos has been described as “The best ‘Dumky’ on disk ever!”  The Tempest Trio returns to the recording studio this fall to record another CD for Naxos.

As a conductor, Mr. Peled won both conducting competitions at Yale Univeristy under the tutelage of Maestro Shink Hahm and at the New England Conservatory under the late Maestra Tamara Brooks.  Ever since he has enjoyed combining his solo performances as a cellist with his conducting.  As a part of Peled’s position as a cello professor at the Peabody Insitute of the John’s Hopkins University, Mr. Peled established the Peabody-Peled Cello Gang; a cello orchestra that is critically acclaimed for their performances and recordings around the United States.

One of the most sought after cello pedagogues, Mr. Peled is a Professor at the Peabody Conservatory of Music of the Johns Hopkins University.