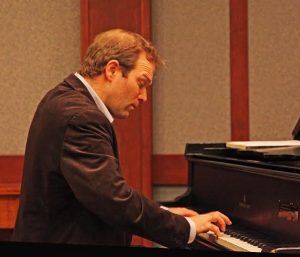 An active soloist, chamber musician, Andrei Baumann has performed extensively in the USA, Europe, Canada and Venezuela. As winner of the 2009 Borromeo String Quartet Guest Artist Award, he performed with the quartet in Jordan Hall on January 29th, 2009. His Carnegie Hall debut at Weill Recital Hall occurred in May 2008 with violinist Lily Francis as part of the Distinctive Debuts series. Other notable performances include a solo recital on the Sundays Live Concert Series at Los Angeles County Arts Museum which was broadcast by KCSN, 88.5 FM, solo recitals at the Crocker Art Museum Classical Music Series in California, performances at Caramoor Festival and with Itzhak Perlman at the Perlman Music Program. Andrei has performed in masterclasses for such distinguished artists as Elisso Wirssaladze, Pavel Gililov, Leon Fleisher, Claude Frank and Marc Durand. Among the numerous festivals he has participated in are Corsi in Sermoneta, Italy; Ost-West Musikfest in Krems, Austria; Internationaler Kammermusikkurs in Böhlen, Germany; Kuhmo Chamber Music Festival in Finland; Banff Centre for the Arts and Orford Arts Centre in Canada; and in the USA, Aspen Music Festival, Perlman Music Program.

In 2013, Mr. Baumann released his first solo album, “From the Mountain Top!” which was recorded at WGBH studios in Boston. He frequently performs as a member of the Lin-Baumann Duo, which has been awarded fellowships by the Community Partnership Program at New England Conservatory.

Mr. Baumann has a Masters of Music in Piano Performance from New England Conservatory in Boston, a Künstlerischer Ausbildung Diploma from the Hochschule für Musik und Darstellende Kunst in Stuttgart, Germany, and a Bachelor of Music degree at the Glenn Gould School of The Royal Conservatory of Music in Toronto, Canada. His most influential teachers have been Andre Laplante, Jamie Saltman and Vivian Hornik Weilerstein.

Mr. Baumann is a piano faculty member at the Rivers School Conservatory in Weston, MA and the Lexington Music School in Lexington, MA. He is also Head of the Piano Department at Camp Encore/Coda in Sweden, Maine. In addition, he has been a jury member at the A Ramon Rivera Piano Competition at Rivers School Conservatory in Weston.