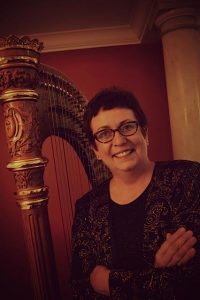 Dr. Beverly Wesner-Hoehn began her musical studies at the age of six. A native Californian, Beverly was always active in local performance groups such as the Sacramento Youth Symphony, honor bands and choral ensembles during her early school days. She received the Bachelor of Music degree in performance from Pacific Union College, California in 1979. It was during her college years of 1977-78 that she became the recipient of a Rotary Fellowship for one year of harp and French study at the Conservatoire Royale de la Musique in Brussels, Belgium where she studied with Francette Bartholomée. There she received the Jean Risler Award for Outstanding Musicianship and the Prix for Harp Performance. Upon returning to the United States, Ms. Wesner-Hoehn continued her studies in harp with Susann McDonald at the University of Southern California where, in 1981, she received the Masters of Music degree as well as the USC Musicians Award and the Delta Gamma Pi Young Teachers Award.

Beverly received the Doctor of Music degree in Harp Performance with High Distinction, from Indiana University in 1989. At Indiana University she was an Associate Instructor for three years and the recipient of the Peter Eagle Fellowship and holds membership in the National Music Honor Society, Pi Kappa Lambda. Wesner-Hoehn was appointed Assistant Professor in the School of Music at Indiana University in Bloomington, Indiana where her teaching duties included private harp lessons, pedagogy courses, chamber music, and directing the harp ensembles. The Indiana University Harp Ensemble, under her direction, performed for Danish National Television as part of the World Harp Congress in Copenhagen and with the Columbus Pro Musica Orchestra in Ohio. For 15 years, she served as Treasurer of the World Harp Congress and also Director of the Corporate board for this international organization. She also served as an Honorary Board Member for the Campus Orchestra of Tel Aviv. Beverly was a member of the jury for the prestigious 12th International Harp Contest in Israel and has served as the Administrative Director of the USA International Harp Competition from 1993-1998 and earlier served as its Treasurer.

Dr. Wesner-Hoehn has performed several times as a guest of Mid America Productions on stage at Carnegie Hall in New York City. She was invited to perform at the Fifth World Harp Congress in Copenhagen, Denmark, where she was the featured soloist with the Danish choral ensemble Hymnia. She has also performed at the Israel, Vienna, and Paris World Harp Congress venues. She has been a guest performer for the University of Leiceister and Newbold College in England; the Japanese government, Fukui Prefecture; and the Brisbane National Tourist Board in Australia.

Since relocating to California, Dr. Wesner-Hoehn has taught for CSUS, and performed for the Mondavi Center and University of California at Davis; she is Principal Harp for the Sacramento Choral Society and Orchestra, which is her favorite ensemble in town; she was the featured guest artist for the Merced and El Dorado Community Concert Series; other concerts include: Pacific Union College, Southern University and Canadian University, as well as with the Northern California Children’s Chorus under the direction of Judy Britts, River City Chorale, Sacramento Philharmonic, The Master Singers Chorale, Apollo Concert Series, Modesto Symphony Orchestra, California State University Wind Ensemble and Orchestra; Auburn, Stockton, and Folsom Symphonies under the baton of Peter Jaffe; Sacramento Ballet Society where she has performed the Nutcracker more than 250 times; and Music in the Mountains Summer Festival Orchestra; she has played for Michael W Smith, Jackie Evancho and Johnny Mathis; summers will find her in the pit at the Music Circus at the Wells Fargo Pavilion, and recently, the Sacramento Theatre Company in the 2013 production of The Little Princess and this year, their 50-show run of The Fantasticks.

Beverly’s discography includes twelve professionally produced albums. Beverly completed a recording of Madrigals I – IV working with renowned Pulitzer Prize winning composer George Crumb, which was released as George Crumb Volume Nine from Bridge Studios in New York. It was since nominated for a Grammy award. Wesner-Hoehn has performed and recorded music compositions by American composer John Eaton, with members of the Los Angeles Philharmonic and Chicago Symphony Orchestra; she was the featured harpist on a definitive recording of the Ceremony of Carols by Benjamin Britten, with the Indianapolis Children’s Choir under the direction of famed director, Henry Leck, entitled Come, Ye Sons of Art. Another holiday CD, released by Schola Cantorum and Dr. Donald Kendrick conducting, features Beverly with this fine choral ensemble performing seasonal carols, From Heaven on High. Beverly has collaborated with Elizabeth Coronata, flute and released a CD entitled, Winter Moon. It was followed by Spring Bloom, a CD featuring Trio Bio, viola (James Een), flute, and harp; the Trio then recorded a world premier of Philippe Hersant’s Nocturnes on Summer Serenade which was released in July, 2014. Beverly’s solo CD, HarpSounds, was released in 2015. Dr. Bev currently enjoys teaching inquisitive harp and piano students at her private studio; her favorite key signature is Db major.