Janos Csontos – Symphony in the Park 2015 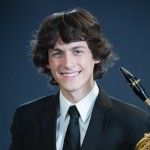 Currently pursuing a performance degree at University of the Pacific in Stockton, California, classical saxophonist János Csontos is in training to become a soloist and ensemble musician. Seeking both a foundation in the classical saxophone repertoire while also expanding the genre by performing contemporary music, he enjoys performing a variety of works from Bach transcriptions to contemporary pieces by composers such as Frank Oteri, Takashi Yoshimatsu, and Roshanne Etezady.

As a soloist, János has performed for many special events and venues, most recently having received the grand prize for the Auburn Symphony Young Artist Competition. His other solo engagements range from multiple appearances on his university’s annual Honors Recital to performances at regional NASA (North American Saxophone Alliance) Conferences.

With a passion for bringing saxophone quartet music to the public ear, János became the founder and ensemble manager for the Broke College Kid Sax Quartet, an ensemble based in his hometown of Auburn, California. From local Farmer’s markets to Christmas Fairs, the quartet frequently performs at many events in the surrounding area and has become an established ensemble in t

he local arts community. János frequently arranges music for the quartet, specializing in various pop songs, video game medleys, and holiday tunes. During the summer of 2014 he also became one of the founding members of the Interlochen Staff Quartet, after working as a counselor at Interlochen Arts camp, where he will be returning this coming summer in 2015.

Starting in the 5th grade, János began on alto saxophone, eventually switching to baritone saxophone as his primary instrument in the 8th grade. He pursued saxophone playing throughout high school until he started attending University of the Pacific, where he now studies under David Henderson. Outside of music, János enjoys volunteering for organizations like Habitat for Humanity and taking long bike rides to explore places he has never been.

With his love for performing, János strives to integrate that love into his teaching and encourage the study of music for music’s sake.