Masterworks I :: The Wild Wild West 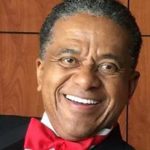 Ralph Cato has traveled the world extensively, telling stories in song using his warm, clarion baritone voice. Whether performing oratorio masterpieces, traditional opera characters, or as an integral part of an ensemble, he brings a humanity to each character he portrays and always delivers a memorable performance.

Early in his career Mr. Cato traveled extensively with Albert McNeil’s Jubilee Singers as a featured soloist. He sang his first oratorio work, Carmina Burana—a work he has since performed numerous times to critical acclaim—with the Estonia National Symphony and Chorus in Tallinn. In Cologne, Germany, he sang his first Mozart Vesperes solennes de confessore with the Cologne Philharmonic. He has also performed over twenty operatic roles, most recently tackling again the demanding role of Amonasro in the Marina Del Rey Symphony’s production of Verdi’s Aida.