Masterworks I 2019 :: Star Trek Through the Years, arr. Calvin Custer 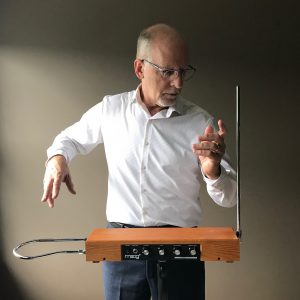 Jeffrey Tobin is a professional speaker with decades of experience in numerous entrepreneurial endeavors.  But there is another side to Jeffrey, one which stretches back to his childhood.  Jeffrey became enamored by both science and science fiction as a child.  In the 1960s, he awaited Saturday nights when he could enjoy SciFi movies on the family television.  Baby Boomers will recall the eerie sound effects of that era which gave many movie soundtracks an extra bit of “creepy.”  Many will recall the sound of the theremin in The Beach Boys’ Good Vibrations, the original 1951 The Day the Earth Stood Still, the theme from Midsomer Murders, and more recently in a couple of episodes of the hit TV series The Big Bang Theory.

The theremin was the accidental invention of Leon Theremin in 1919.  Some say it was the first electronic instrument, but there is no doubt that the theremin is among the most unique: the performer does not touch the instrument.  It is played by the movement of the hands in relation to two small antennas. It’s as strange to watch as it is to hear.

While not a professional musician, Jeffrey has a long history of performance.  One of his compositions was performed by both the Glenn Miller and the Tommy Dorsey present-day orchestras.  He wrote the official anthem for his home county of Indiana, Pennsylvania.  He also enjoys playing the nose flute, jaw harp, washtub bass, ukulele, and numerous other fun and unique instruments.

Jeffrey is a graduate of Valley Forge Military Academy and Junior College, Westminster College of New Wilmington, Pennsylvania, and he received the Master of Theological Studies in May from the Pittsburgh Theological Seminary.